Boccia is similar to bocce, but was designed for athletes with physical disabilities.  However, in recreational play, rules can be modified to accommodate players of all abilities.  The object of the game is to throw the play balls (each side has six, which are blue or red) as close as possible to a single target ball or jack (white).  A common playing area is marked on the court.  It consists of six throwing boxes, in which players must stay for the shot to be valid.  Points are scored based on how close to the jack a ball lands.  When all balls have been thrown, the distances from players’ balls to the jack is measured and points assigned accordingly.  If a ball is thrown out of the playing area, it is placed on the cross.

What’s Needed to Play Boccia
Boccia uses leather balls that are a little larger than a tennis ball.  The boccia court has a flat, smooth surface with a common playing area and a scoring area – pretty much any flat surface can be set up as a boccia court.  However, a regulation Bocce courts are 91 feet by 13 feet. 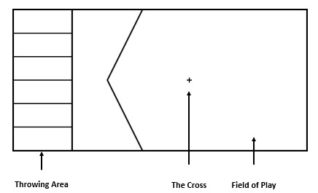 Classifications for Competition
As with other competitive para-sports, boccia players are assigned to a class based on the severity of their disability.

Additional Resources
USA Boccia
USA Boccia is the nonprofit organization for boccia in the USA.  Its mission is to provide persons with physical disabilities the opportunity to learn, play, and compete in the sport of boccia on the local, regional, national and international level.

Learn about para sports events to get an idea about what’s out there and to find some ways to participate.