Originally called murderball, quad rugby or wheelchair rugby is just as aggressive as traditional rugby.  According to the United States Quad Rugby Association, “Rugby is a full contact sport, but no personal contact is allowed: Slapping, hitting, punching, gouging out eyes, biting off ears, etc. is not allowed and penalties are enforced, usually requiring time in the penalty box.”  (WOW! Ed.)

Quad rugby or wheelchair rugby is played on a regulation-size basketball court with minor changes to mark goals at each end. Four players compete on each side of the court passing a volleyball back and forth while advancing into the opponent’s half of the court.  Scoring occurs when the opposing team crosses over the goal line with the volleyball.

Classifications for Quad Rugby or Wheelchair Rugby Competition
Like in other competitive para-sports or adaptive sports, quad rugby or wheelchair rugby players are classified and assigned a point value according to their level of their mobility impairment. Players are given number, from one of seven classifications, ranging from 0.5–3.5. The 0.5 player has the greatest impairment (comparable to a C5 quadriplegic) and the 3.5 player has the least impairment (similar to a C-7–8 incomplete quadriplegic). During a quad rugby or wheelchair rugby game, the sum of each team’s players’ classifications points cannot exceed 8.0 points.

Quad Rugby or Wheelchair Rugby Chairs
For competitive quad rugby or wheelchair rugby, participants use special chairs which are usually made of aluminum or titanium and include a set of anti-tip wheels.  Wheels are also set at an angle (or cambered) to provide greater stability and maneuverability.  Offensive and defensive players’ chairs have a few differences including:

Murderball (1:57)
See the trailer for “Murderball” an award-winning documentary about the 2004 US wheelchair rugby team’s competition in the Athens Paralympic Games.

Additional Resources
Learn about para sports events to get an idea about what’s out there and to find some ways to participate. 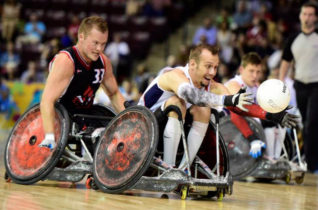